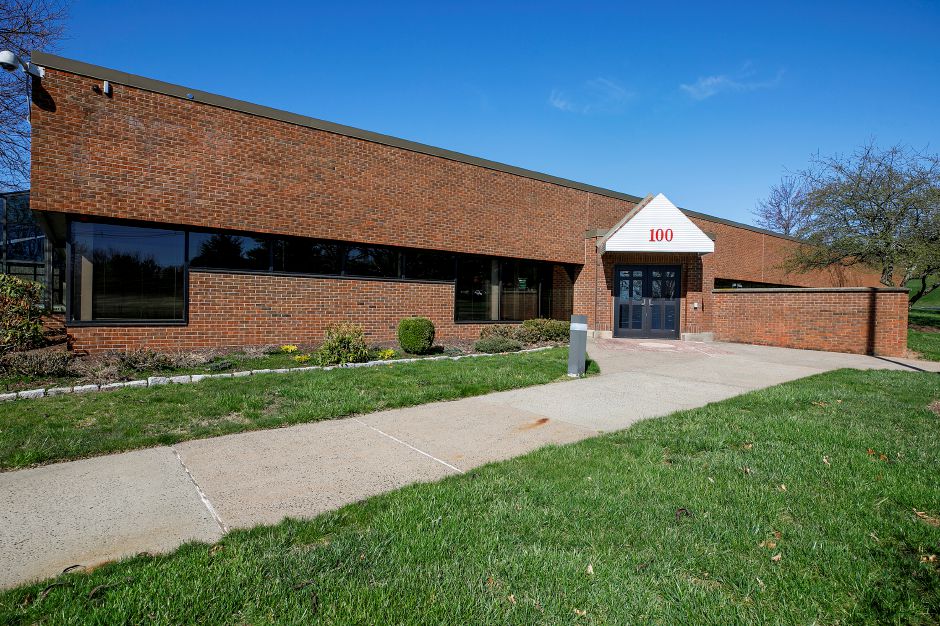 WALLINGFORD — The site plan for a new police headquarters was unanimously approved by the Planning and Zoning Commission this week.

Renovation plans for 100 Barnes Road, a 41,000 square foot office building that once housed 3M, include a new public entrance on the south side that pays architectural homage to the Wallingford Armory, where the police department is currently located. The city purchased 100 Barnes Road for $1.76 million in July 2021.

“The public entrance that is proposed for the south side will pay homage to the former arsenal building on the main (north) street. So we have two towers that mimic the structure of the arsenal on (North) Main Street, with an identifiable entrance for the public,” said Brian Humes, of Jacunski Humes Architects, during Monday’s meeting. The company was commissioned by the city to design the new police headquarters.

The renovation, which comes with an estimated price tag of $24 million, would also add a secure vehicle entrance to the north of the building and two structures to the east – a live-fire range and a maintenance building and traffic storage. The commission discussed concerns about noise from the firearms training range.

Humes said the masonry chosen for the walls and the concrete panels for the roof would dampen sound to a “reasonable level”. Additional measures are planned to prevent the building’s air circulation system from exceeding municipal noise regulations.

The 75-foot long range is designed for handgun training, which is becoming increasingly difficult to schedule in close quarters – particularly if state police transition to using the police training center in state of Meriden as the default beach in the future.

“The reason they’re asking for this facility is because gun proficiency is getting harder and harder to achieve with the availability of outdoor or indoor ranges,” Humes said. “Their options are becoming fewer and fewer. It’s not unique to Wallingford, it’s happening statewide right now.

Commissioner Jaime Hine said he remains concerned about the potential for noise, but believes the project meets the needs of the police department.

“I’m totally supportive of this project and I think if we’re going to do something let’s do it right and I think it provides things to the police department that they don’t have right now that they have need.” Hine said. “So I am in favor of that, the only thing I would say is that I think a lot of the questions here about this training center are questions we would ask if it was a private candidate I think those are…basic questions we would ask a private applicant and I don’t think we got a lot of answers, or at least details regarding usage that we would normally have required or expected.

In other cases, the commission discussed changes to the incentive housing area, as well as an apartment plan on Hall Avenue.

The commission also continued its ongoing discussion of rewriting the city’s incentive housing area to allow for greater density in an area of ​​downtown around the intersection of Route 5 and Center Street. City planner Kevin Pagini introduced wording that would create a new 7.2-acre sub-district in the area, which would allow 50 units per acre for developments including affordable housing. The sub-district would be around the Green Station Railroad on Route 5, extending to Hall Avenue, Quinnipiac Street, and Center Street.

Commission Chairman Jim Seichter suggested that the proposed text change be amended to ensure that incentive housing applications are allowed to have a higher density throughout the downtown core than market rate developments, noting that in some areas the opposite is currently true.

Pagini will take the commissioners’ comments and draft an official text amendment – ​​and a name for the area – for the panel to consider at its next meeting.

The commission unanimously approved a site plan for the conversion of a four-story commercial building at 43 Hall Ave. into an apartment building with nine market-rate units and commercial space on the ground floor.

The application was originally submitted with four additional basement apartments, but this requires a special permit under city bylaws. Yalesville Property Management will likely request a special permit in the future.