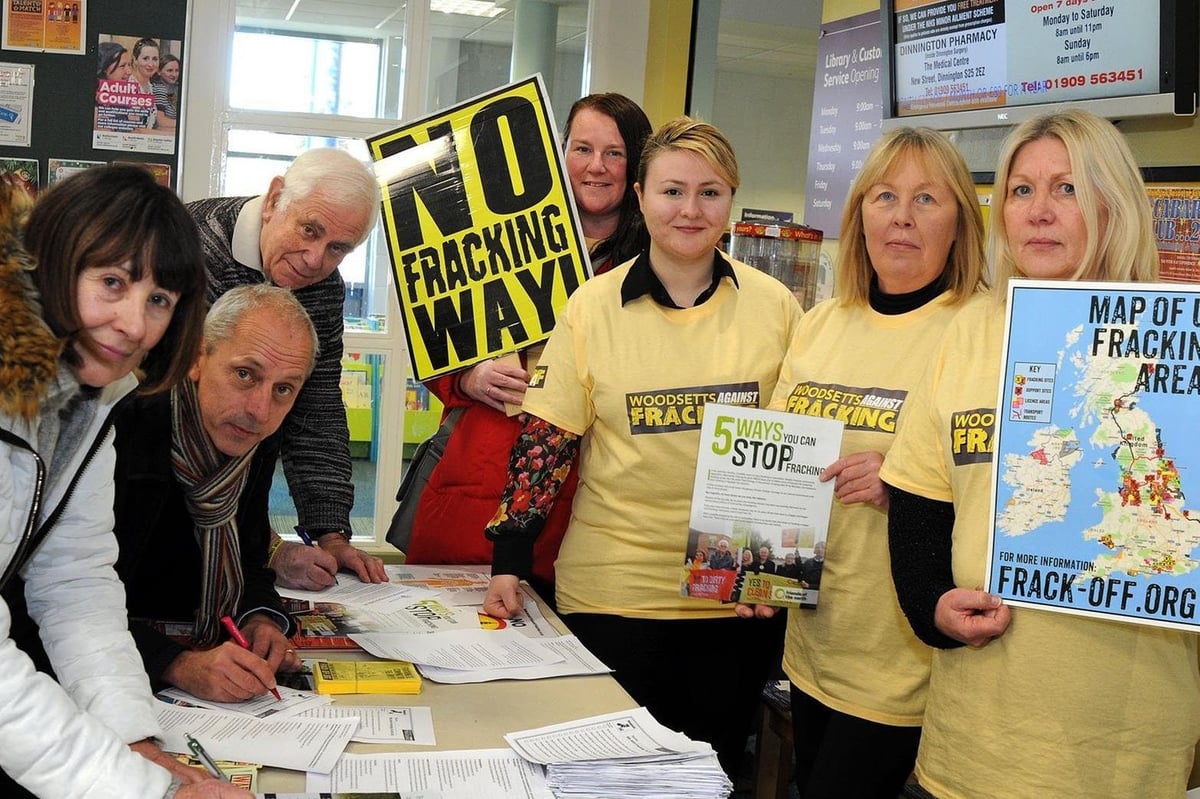 The upgrade secretary has rejected an appeal by Ineos to get the green light for a shale gas exploration site off Dinnington Road in Woodsetts, near Rotherham.

But in a recently published government decision, the program has now been blocked.

Members of the campaign group pictured in 2018

A decision by Housing Minister and MP for Yorkshire Stuart Andrew on behalf of Mr Gove read: ‘The Secretary of State disagrees with the Inspector’s recommendation.

“He decided to reject the appeal and refuse the building permit.”

He said Mr Gove made his decision based on factors including damage to green belt, negative visual impacts from the project and damage to neighboring properties from a 3m high sound barrier which was to be built around the site.

The report states: “Overall, he considers that the material considerations in this case indicate a decision consistent with the development plan – that is, a denial of permission. The Secretary of State therefore concludes that the appeal should be dismissed and that the planning permit should be refused.

There has been a long campaign against fracking plans for Woodsetts

Ineos has six weeks to decide whether or not to challenge the decision in the High Court.

Rother Valley MP Alexander Stafford, who campaigned against the fracking site to get the green light in his constituency, welcomed the result.

“I am delighted that the government has stood up for the people of Rother Valley on another crucial issue for our region,” said the Tory MP.

“I lobbied tirelessly from behind the scenes for the Secretary of State to intervene, and I am pleased that my calls have been answered with decisive and positive action.

“No one is a bigger advocate for cleaner energy than I am, but fracking is not and never has been the answer.

“It is not wanted here in Rother Valley, and this Conservative government has once again listened to us and represented us vigorously. I hope the residents of Woodsetts rejoice in this momentous victory we have achieved together.

“Communities in the south of our borough have been living with the threat of fracking hanging over them for far too long, so I’m really excited to finally see the direction coming from the government. Throughout the process, we felt that fracking would be bad news for our communities, for the local environment and an unsustainable way of meeting our energy needs.

“It seemed particularly in jeopardy recently when parts of the Conservative Party began to press publicly to end the moratorium. Our planning committee was one of the first in the country to reject a request for fracking and it is ultimately the government validation of this appeal, and our local planning policy.We all look forward to seeing this threat of fracking gone for good now.

There is currently a moratorium on fracking in the UK which was introduced by Boris Johnson after shale gas exploration was previously backed by Theresa May as a way to improve UK energy security.

More than a decade of efforts to develop hydraulic fracturing for shale gas appeared to be over, with authorities ordering the sealing of the only two horizontal drilled wells in Lancashire. But the order to permanently seal the wells was suspended earlier this year and the government has commissioned a review of the science around the process.

Ineos founder and chairman Sir Jim Ratcliffe said earlier this year it was “ridiculous” that the UK was not taking advantage of its shale gas reserves.

Speaking in April, he said: ‘The UK is in the midst of an energy crisis with ever-rising prices pushing people into energy poverty while giving huge sums of money to schemes oppressive.

“It’s a ridiculous situation with so much gas under our feet. As the United States has shown, homegrown shale gas could make us self-sufficient in 10 years.

At the Yorkshire Post, we are committed to speaking truth to power on behalf of the people who call County God’s Own home. Our Politics Team and Westminster Correspondent are the eyes and ears of Yorkshire in the halls of power.