By Betty A. CraneMay 11, 2022Site development
No Comments 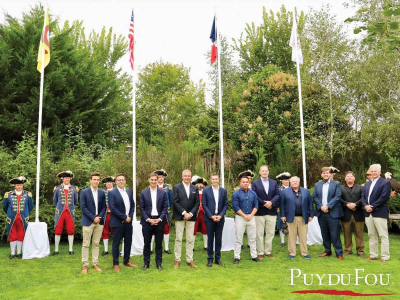 One of the world’s largest amusement park companies, based in France, Puy du Fou, is teaming up with the Eastern Band of Cherokee Indians to create a “theme show” centered on Cherokee history on the property of 200 acres under development by Kituwah LLC, off Interstate 40 at Exit 407 in Sevier County.

The Cherokee Tribal Council voted May 11-1 to appropriate $75 million for the project, including $45 million budgeted for attraction construction and $30 million for site development costs on the entire 80-acre section of the property slated for Phase 1 development. The Puy du Fou project is expected to control 4-5 acres when it opens in 2024.

“This project in Tennessee developed with EBCI means a lot to us: it will initiate our presence on American soil, where there are so many great stories to tell”, Nicolas de Villiers, President & Artistic Director of Puy du Fou . “As lovers of history and cultural roots, we are proud and honored to partner with the EBCI Tribe to achieve this goal.”

Twice voted “Best Theme Park in the World”, Puy du Fou operates an original flagship park in France that attracts more than 2.3 million visitors each year and only follows Disneyland Paris for the most in the country. The park features multiple shows, vintage villages, and more than half a dozen on-site resorts custom designed and built with authenticity as the focal point. The company now has attractions in Spain, the Netherlands, the UK and China.

This would be its first foray into the US market, and under the agreement, Kituwah LLC would have first right of refusal on any future US projects.

“We are excited to take the first steps towards developing this world-class attraction that will help sustain our nation economically while creating a new platform to share dimensions of Cherokee history that many have never heard” , Tribal Council Chairman Richard French said in a statement.

The tribe’s relationship with Puy du Fou at exit 407 will be similar to its relationship with Caesar’s Entertainment at its casinos. The tribe will own the property, building and business through a newly formed company called Cherokee Rose, which in turn is owned by Kituwah LLC, but Puy du Fou will design and operate the attraction.

The attraction itself will consist of a 125,000 to 175,000 square foot “retail entertainment” dining and entertainment space, with an immersive show that will be the first of its kind in the United States, said Matthew Cross, CEO of OE Experiences, the Knoxville-based experience development company that represented Kituwah and The 407 in their global search for ideal partners.

“The closest example would be something like Titanic over there in Pigeon Forge where you walk around a themed space, but it’s much more about immersion and the authenticity of actually being there,” said said Cross. “And those sets are complemented by live actors, which is sort of Puy du Fou’s signature.”

“The vocation of Puy du Fou is to tell stories in an innovative, original and rooted way,” said Manon Rigaudeau, Puy du Fou’s international press officer. “This new immersive show is the embodiment of this vocation: it will plunge visitors into the heart of a moving epic, from the Appalachians to the plains of Champagne.

Puy du Fou is one of the only companies in the world to create its own creative design and operate the attraction, allowing it to “seamlessly integrate” guest experiences into the space.

The show itself will present the “authentic and heartbreaking” story of Cherokee heroism during World War I through a “fully immersive” show that will take guests on a “patriotic and moving journey for the whole family”, according to a news. Release.

“These were Cherokees who actually participated on behalf of the Allies, and this experience will put you in the thick of the action as someone who travels overseas with them and has that experience,” Cross said. “Our goal, as is the goal of any experience, is for it to be highly transformative. This is going to be a very emotional yet very positive story, and we hope everyone comes away with a sense of admiration for a story that many people don’t know and which, in my opinion, deserves to be told.

During a May 5 Tribal Council discussion, Big Cove representative Teresa McCoy said the proposal met with a favorable reception from Big Cove residents when she discussed it with them at a meeting. She said she was also “comfortable” with the decision, despite the steep price tag.

“If we give the information to our people, they will read it and make their own decisions and take away the fear of us sitting here and handing out $75 million, because it’s scary,” she said. . “He is.”

Birdtown representative Albert Rose was the only one to vote against the project. He disputed that the tribe, not Puy du Fou, would pay to build the attraction and wondered what the return on investment would be. His instinct is that it’s not a good deal, he says.

“Commercial games, you’re going to get a pretty quick return,” he said. “This, I don’t know when I was going to get it back.”

Registered member Ernest Tiger also spoke out against the proposal.

“I just think the money could be better spent,” he said. “Why not spend $75 million and buy every member of the tribe a house?”

Buc-ee’s, the first company to announce its partnership with Kituwah, is currently working to vertically build what will be the world’s largest convenience store when it opens next summer. The entire 80 acres of Phase 1 is now the subject of letters of intent from restaurants, retail chains and concepts looking to build there. Although these letters are not binding, Cross expects the Puy du Fou announcement to prompt these companies to make their own public commitments. In December, the Tribal Council voted to allow another of its LLCs, EBCI Holdings, to proceed with construction of a sports betting bar on the property.

In addition to work at Buc-ee, fine grading has begun for the construction of a Marriott Courtyard owned by Kituwah LLC. The tribe hopes to see this facility open in 2023, but achieving that goal will be “challenging” given current supply chain issues, Cross said.

Cross said he doesn’t anticipate any zoning issues with the development, as the property was designated as a tourism improvement district before the tribe purchased it in 2019. However, he said the developers are discussing the how the current labor shortage might impact development plans and considered potential solutions, including labor housing, and also assessed infrastructure needs in the community.

“Many new timelines all start at the same time after a milestone like this, but we pay a lot of attention to the City of Sevierville, Sevier County, and the Tennessee Department of Transportation regarding area infrastructure and which is necessary to support not just our development, but the community itself.