By Betty A. CraneJune 2, 2022Site plan
No Comments 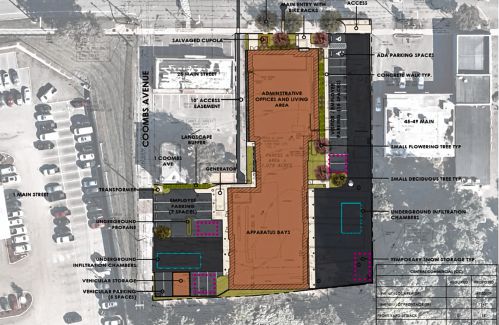 GREENFIELD — The Zoning Appeal Board has approved the site plan and special permit with conditions for the new fire hall, to be built on Main Street near Coombs Avenue.

These conditions include the planting of low-growing green shrubs along the parking area on the Coombs Avenue side of the development; adding a barrier around the concrete transformer pad (or a transformer that provides significant sound reduction); and that the project meets all city and state building requirements. Council members also approved sewer connection plans, while acknowledging receipt of a memo submitted by Technical Superintendent Alan Twarog.

The special permit, which allows for a waiver that would reduce the 8-foot buffer requirement along Coombs Avenue and the 15% open space requirement for new developments, was unanimously approved by the ZBA Wednesday night. With members of the fire station construction committee, David Singer and Jim Winn, recusing themselves due to conflicts of interest, the permit required the support of the remaining four board members.

Members of the fire station construction committee said the aim was to have the bid package sent out by July 1, hoping to meet the contract award date of August 15 and the start of construction in September.

Speaking on behalf of the city, Katrina Pacheco of Pacheco Ross Architects and Jon Allard of Fuss & O’Neill presented plans for the new fire station, noting their request for a waiver.

“Most of the landscape, you’ll see, is at the north end of the building, where we separate the facade with some planting, and along the side of the visitor parking lot as well,” Allard said, pointing to the 15 spaces. parking for visitors. /employees on the east side of the building, accessible from Main Street.

Allard explained that while there is a landscaped buffer between the employee parking lot and Coombs Avenue, it is currently less than a foot. In this parking lot, there are seven spaces reserved for employees.

At one point, Maloney suggested the possibility of increasing the open space by decreasing the number of parking spaces. Fire Chief Robert Strahan, however, said the department “cannot afford” to lose designated spaces for both employees and visitors, given that heavy staffing days would require them.

ZBA member Peter Wozniak pointed out that if the extent of parking is necessary, there should be signs to ensure that anyone who parks in those spaces is there on department business.

He also expressed concern about hum, or potential noise, that could come from the proposed transformer block on the Coombs Avenue side of the building, near residences.

“Something should be done to mitigate the noise coming from this transformer because it doesn’t appear that far from the residence,” he said.

Other discussions focused on navigating motors and other service vehicles to and from the building, stormwater drainage plans, and the two proposed sewer lines. In his correspondence, Twarog noted that one sewer line per building is typical and would be recommended unless absolutely necessary.

“They are mostly arranged that way because of the berries,” Pacheco replied.

One of the lines, she explained, includes an oil and water separator, capturing any oil and other contamination on site, while the other is primarily for sanitary waste. office areas and dormitory areas. Maloney asked if there was a way to accommodate the Department of Public Works’ note that a sewer line is the norm.

“I think it wouldn’t be cost effective to combine them,” Pacheco said, adding that it would involve a “complex feat” to do so.

Maloney stressed the importance of the board granting a waiver, noting that during his tenure at the ZBA, only one was granted.

“Gaps in Massachusetts are hard to find,” he said. “I think we’re going to be pretty flexible, because I think we know we have to have a real fire station and have our fire department in a real building and get them out of the tents. I think whatever conditions the board is inclined to impose…I’m sure you’ll all smile with joy and comply.

No member of the public commented during the public hearing portion of the meeting.

“I know it’s been a long session, but it’s important for the project,” Pacheco told members before beginning their deliberations after nearly two hours of discussion. “I appreciate offers to help us mitigate what we are asking for.”

In the end, all four members voted in favor of the waiver with conditions.