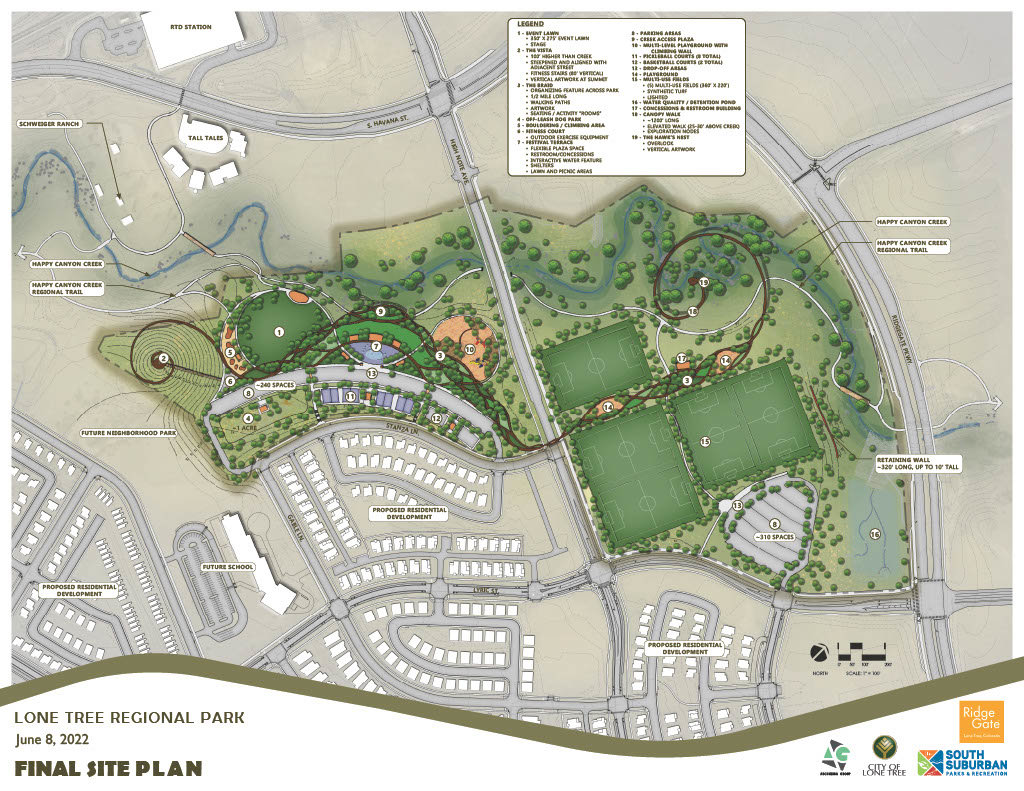 The final site plan for Lone Tree Regional Park, an 80-acre park near I-25 and RidgeGate Parkway, passed its first approval vote June 8 at the parks board meeting and recreation in the southern suburbs.

The next step for the proposal is the Lone Tree Town Council. The board will vote on the measure at the June 20 regular meeting.

The regional park is a collaborative effort between Lone Tree City Council and South Suburban Parks and Recreation. If it goes ahead, it will be Lone Tree’s first regional park, according to the city’s website.

The park is part of the RidgeGate East development, a sprawling development on the east side of I-25 and RidgeGate Parkway that involves construction of three residential villages, a 400-acre Lone Tree City Center, retail districts, schools and more.

The preliminary plan for the park includes a variety of amenities, including a dog park, a festival terrace, a multi-level playground and several sports fields, according to the park’s webpage. It will also feature a 5,000-person amphitheater, Deputy City Manager Austin Good said during a June 7 study session.

The concept for the park’s final site plan, created by landscape architect The Architerra Group, is called “The Braid”, Good said.

Where the paths intersect, there will be different sections, also called “rooms,” spread throughout the park, Good said. These rooms can accommodate different uses, depending on the wishes of the community.

“We’re really, really excited about the opportunities that will open up here in the next stage of design when we start talking – ‘Well, what exactly is going on in these rooms? ‘” Good said, adding that some ideas for rooms include a community garden space and community art walks.

Building the park will take time and cost millions, Good explained. He said South Suburban Parks and Recreation has budgeted $300,000 this calendar year to advance the design of the park from its current preliminary plan to further develop a phased plan for the project.

“Right now, we’re estimating about $25 million for a phase one,” Good said, pointing out that it will take more than the city and South Suburban Parks and Recreation to build the project.

On June 8, the South Suburb Parks and Recreation Board voted 4-0 in favor of the plan, excluding board member Jim Taylor who was not present at the meeting, Jennifer said. King, head of district administrative services.

If city council votes to approve the plan on June 20, one of the project’s next steps will be to find additional partners to fund the project, according to a staff report.

“As we seek out potential partners, I am hopeful that Douglas County will recognize this as a real opportunity to provide additional amenities to their Lone Tree residents, but [also] to the community far beyond,” Mayor Jackie Millet said during the study session. “This park, we hope, is also a regional facility.”

Millet said the city has found that many Douglas County residents come to Lone Tree for recreation, and this park is likely to attract people outside of Lone Tree.

“We want to make sure that Douglas County also has a voice at this table as we move forward, to encourage them to invest,” Millet said, adding that she would like the city to engage Douglas County residents during the community feedback process.

Good also stressed the importance of getting community feedback on the park’s current plan and next steps in the process, saying the city will continue to develop the park’s webpage, cityoflonetree.com/regionalpark/, where members from the community can submit questions and comments about the project.

“It’s a big, multi-year effort just to put a shovel in the ground,” Good said. “It’s going to be a really, really important piece, continuing to engage with [the] community throughout the process.