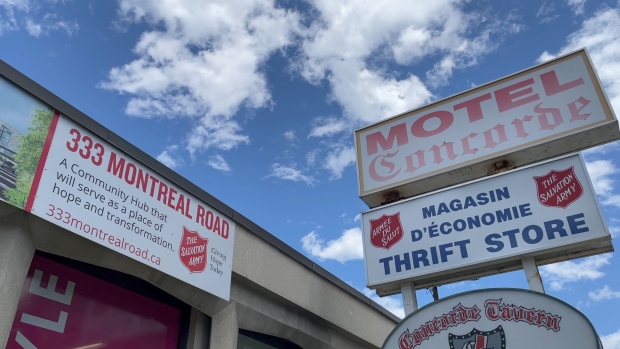 The Ottawa planning committee has approved the Salvation Army site plan which includes a shelter on Montreal Road in Vanier.

Chantal Pellerin lives near the new site and says that while it is needed, it might be too far for those using the current facilities.

“Vanier has always been known as one of the places where we have a lot of transients and a lot of crime and so on. Although I understand there is a need,” says Pellerin. “It makes it harder for people who are already located downtown. Now they have to travel here to get the services they need.”

The Salvation Army made its case to the committee, saying the services it will provide at the new facility are urgently needed.

“We are delighted that the Planning Committee has approved the plan for the Salvation Army Center of Hope on Montreal Road,” says Glenn van Gulik of The Salvation Army. “Our vision for the Center is a place of hope and transformation; a place that works with the community to support those who struggle and build a hopeful future with them.”

The Salvation Army’s plan for a residential care facility and emergency shelter includes 32 supportive housing beds. The emergency shelter will be 25% smaller than the original plan, offering 99 beds instead of 140.

The City of Ottawa says the proposed addictions program was dropped from the plan.

Drew Dobson owns Finnigan’s Pub, right next to the new shelter. He fears it is too big for the area.

“It’s not that we don’t want anyone here. We just want a reasonable facility here that fits into the community,” Dobson says. “The city needs accommodation facilities and the ones in the market are getting old and it may be time for a new modern facility. But the new modern facility should not exceed 100 beds maximum. They will overwhelm the community in which you place if you build them too big.”

The proposed design will be constructed primarily behind the thrift store to keep it away from the main road. Councilor Mathieu Fleury opposes the idea, saying there are better ways to support the city’s most vulnerable.

“I will continue to advocate and push my colleagues for public money to go to models that are modern. And that bring dignity and bring stability,” Fleury said. “And the only way to do that is when someone has a key to a unit with a lease.”

Reaction to the relocation has been mixed from area residents.

“I don’t think it’s going to bring the neighborhood down,” says a Vanier resident.

“It’s really tough, but if my heart speaks, I’d say wherever there’s space, we have to do it,” says Vanier resident Nicole Maillet.

“It’s a service we need, so I understand,” says Pellerin. “But I’m kind of on the fence about how I feel about it.”

With this approval, the Salvation Army is on the verge of finally getting a new facility.