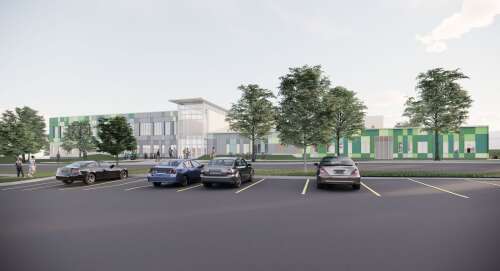 New London — The planned $30 million community recreation center in Fort Trumbull reached another milestone earlier this month when the Planning and Zoning Commission approved a site development plan for the project.

The plan presented to the commission at its July 21 meeting outlines the location of the building and parking lot, stormwater drainage plans and landscaping. Construction is expected to begin later this year.

With the approval, Felix Reyes, director of the city’s Office of Planning and Development, said the project could continue to move forward as planned.

“The next phase is to prepare tender documents and better understand the costs, material availability and lead times of the main infrastructure components – everything anyone can imagine with n’ any construction project going on right now.” Reyes said.

The city council has approved $30 million for the project, though officials hope construction estimates will be lower. The latest design for the facility, developed by Silver/Petrucelli + Associates and shown publicly in March, slightly reduced the size of the facility and replaced the originally planned steel building with a brick and concrete structure to contain costs. .

The design calls for a two-story, 58,000 square foot facility with a 100-space parking lot separated from the building by an existing road. The center will have a two-court gymnasium, eight-lane swimming pool, indoor track, practice and game rooms, and a wing dedicated to city service and recreation programs. There will be a community lounge, a classroom for an early childhood program, a teaching kitchen and other amenities.

The facility will be located on two city-owned parcels totaling approximately 7 acres on the Fort Trumbull Peninsula, adjacent to a 104-unit residential development project and an extended-stay hotel.

Jim Rossman, representing Stadia Engineering Associates, based in New London, noted at the July 21 meeting of the Planning and Zoning Commission that the plans call for parking with a permeable surface as opposed to the typical sidewalk. The surface is porous and allows water to seep through the pavement into the ground. This reduces the amount of stormwater runoff, he said.

“Yeah, it’s a bit unique for a city like the City of New London to have a permeable car park of this size,” he said. “This should serve as an example for other developers in the region (who might) emulate this type of LID (Low Impact Development)”

The plan raised questions among commission members about the city’s maintenance of the surface. Rossman said the only restriction is that sand cannot be used. Using sand will clog the porous surface and require vacuuming.

“It’s a different management regime over time, but just as durable as normal pavement,” he said.

Reyes said the city continues to seek funds to reduce the cost of debt and ease the burden on ratepayers. The Office of Development and Planning recently applied for a $25 million grant from the state’s Community Investment Funds program, which is designed to strengthen economic or community development in underserved communities.

Reyes said the request is ambitious, but he believes the community center is what the grant was intended for.

“A project that encompasses community well-being, recreation, youth and senior engagement, and amenities that improve the quality of life for all of our residents,” he said. We think this is the right investment for our city and the timing couldn’t be more perfect.

The city has already secured a $1.2 million grant through the state’s Brownfields Remediation Program to cover the cost of cleaning up any environmental contamination at the site. U.S. Senators Richard Blumenthal and Chris Murphy on Friday announced the inclusion of $2 million for construction as part of an appropriations bill currently before Congress.

The future cost of maintaining the building is estimated to be over $2 million per year and is dependent on revenue from memberships, facility rental fees, and the provision of income-based memberships to residents. City officials said the plan is to have revenues above operational costs by year four.