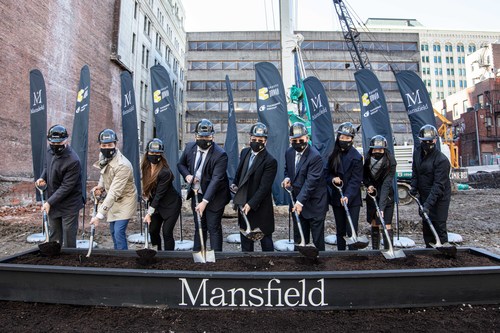 A 19-story mixed-use development will soon be built on the former site of Montreal’s historic Loew’s Theatre, giving the city’s Mainsfield Street a new face.

A significant presence of asbestos and significant structural constraints made it impossible to preserve what remained of the dilapidated theatre, other than the walkway over the north aisle. Moreover, the subdivision of the interior over the years has damaged the characteristic spatial sequence, affecting the historical value of the building. However, in keeping with the promoter Groupe Brivia’s commitment to Montreal’s heritage, the company is building a project in its place that blends carefully into its immediate environment, consisting of several buildings of architectural interest.

The design will reconnect Cathcart and Metcalfe streets and recall the site’s cinematic past with a dome above the main entrance soffit that will mimic the original theater ceiling. Pedestrians will be immersed in an urban mural, bringing together elements inspired by the former Loew’s Theatre.

As site excavation begins, 226 downtown residential units take another step toward completion. Future residents of the project will have the opportunity to live next to Sainte-Catherine Street, starting in 2024.

Béïque Legault Thuot Architectes (BLTA), the architects of the project, reflected the different uses of the site in their vision. At the forefront of urban life, an outdoor swimming pool on a rooftop terrace overlooking Dorchester Square and the shops and boutiques of downtown Montreal will be one of the main features of the building.

“Redeveloping an iconic site like the former Loew’s Theater requires skill and sensitivity, and I am particularly sensitive to what this place represents,” said Kheng Ly, Founder, President and CEO of Brivia Group. “As a Montrealer, I understand the attachment of citizens and the community to traces of the past. Here in Mansfield, we will strive to remember the beautiful hours and moments experienced by Montrealers who, for decades, occupied the seats of Loew’s Theatre. I want this atmospheric walkway to be a time-tested reminder of the site’s cultural past.