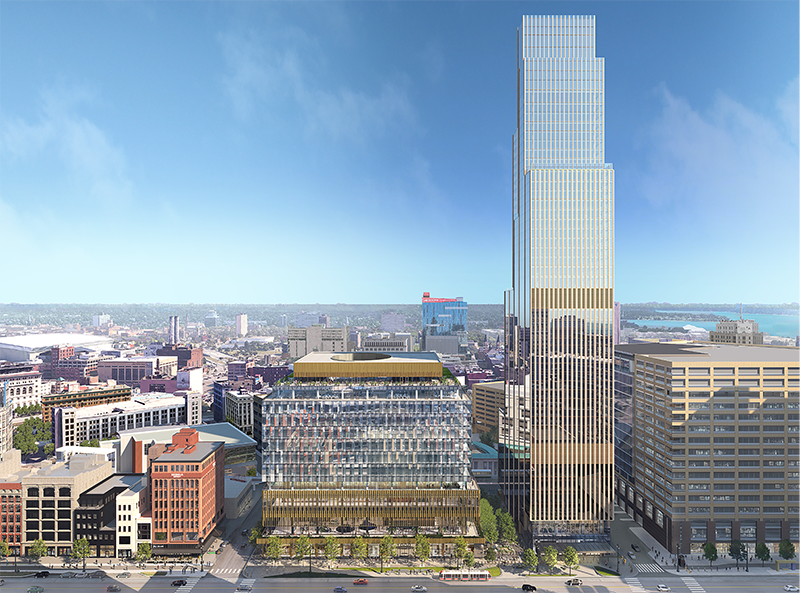 Bedrock, a full-service real estate company operating in Detroit and Cleveland, has revealed for the first time a preview of the planned mid-size office space, retail destination, event spaces, public amenities on the roof and an activated public plaza on the site of the former Hudson Department Store at 1208 Woodward Ave.

Currently under construction, the mid-rise building on the north end of the Hudson site (just south of the Shinola Hotel) was topped off at 220 feet in April.

Structural work on a nearby tower, located at the south end of the Hudson site, continues to reach 685 feet in height next year. When complete, the tower will be the second tallest building in Detroit and the state of Michigan (after the Detroit Marriott at the Renaissance Center).

While today’s announcement focuses on the mid-rise building, the tower is expected to offer primarily residential space complemented by office, retail and restaurant offerings.

“The significance of this development goes beyond its unique and distinctive physical presence. Once complete, with awe-inspiring views, the project will bring premier office, residential, hotel and event spaces with carefully curated dining and entertainment experiences,” said Kofi Bonner, CEO of Bedrock.

“But more importantly, the project will anchor the transformation of the historic Woodward Corridor and exemplify Detroit’s resurgence. The revitalization of Detroit’s most central site will become a must-see and create fond memories for Detroit residents and visitors for generations to come.

The overall project is expected to spur economic development by creating approximately 2,000 permanent and full-time jobs when completed, bringing new businesses to the city and activating what was once mostly vacant land. The historic destination will have created 7,500 construction jobs when completed and will generate significant revenue from direct income taxes and commercial activities for the city.

The second and third floors of the mid-rise office building have been designed to incorporate a 126,000 gross square foot event and meeting venue with a wide range of modern amenities. The space will host events ranging from 50 to 2,500 people.

Major event space on Woodard Avenue will be close to Campus Martius, placing event attendees within walking distance of the many local businesses in the central business district.

These existing businesses will also be joined by new ground floor retail and experience spaces along Woodward and Grand River Avenues, which Bedrock says will enhance the appeal and excitement of the experience. walkway along the historic Woodward Avenue shopping corridor.

The development will feature an activated through plaza in the space between the office building and the development’s tower, in line with Bedrock’s commitment to activating public spaces such as Parker’s Alley and the Belt. The space will provide additional retail and exhibition frontage complemented by public art and year-round programming. The project will also include unique rooftop food and beverage facilities, offering a unique view of the city skyline.

New York-based SHoP Architects and Detroit-based Hamilton Anderson worked in tandem with Bedrock to ensure the project provided vibrant public spaces and an activated streetscape on all sides of the development.

The mid-rise will provide over 400,000 gross square feet of office space with large flexible floor plates and floor-to-ceiling windows, providing an abundance of natural light and exceptional city views.

“The future of the industry is one of ingenuity and creativity,” says Anna Okerhjelm, Studio Manager at Pophouse. “We set out to create a design narrative for the development on the site of the former Hudson Department Store that embraces the soul of opportunity in Detroit and complements the rich fabric of the city to inspire and propel growth. Our team is proud to play a part in realizing this shared vision of a world-class urban campus, which will function as an incubator for innovation and progress in the future.

Office leasing for the office building is ongoing.

Construction of the development has been ongoing since Bedrock began in 2017. Overall, 130ft caissons have been drilled to support the foundations of the buildings, and in total over 10,200 tons of steel and 11,600 beams were used to create structural support.

Since March 2021, the building has steadily increased in height, with the office building “peaking” at 220 feet in April 2022. Structural work on the tower continues and will reach its final height of 685 feet in 2023, becoming the second tallest building in Detroit and the state of Michigan.

The development is expected to be completed in 2024.

See the full gallery of renders below: