By Betty A. CraneFebruary 17, 2022Site plan
No Comments 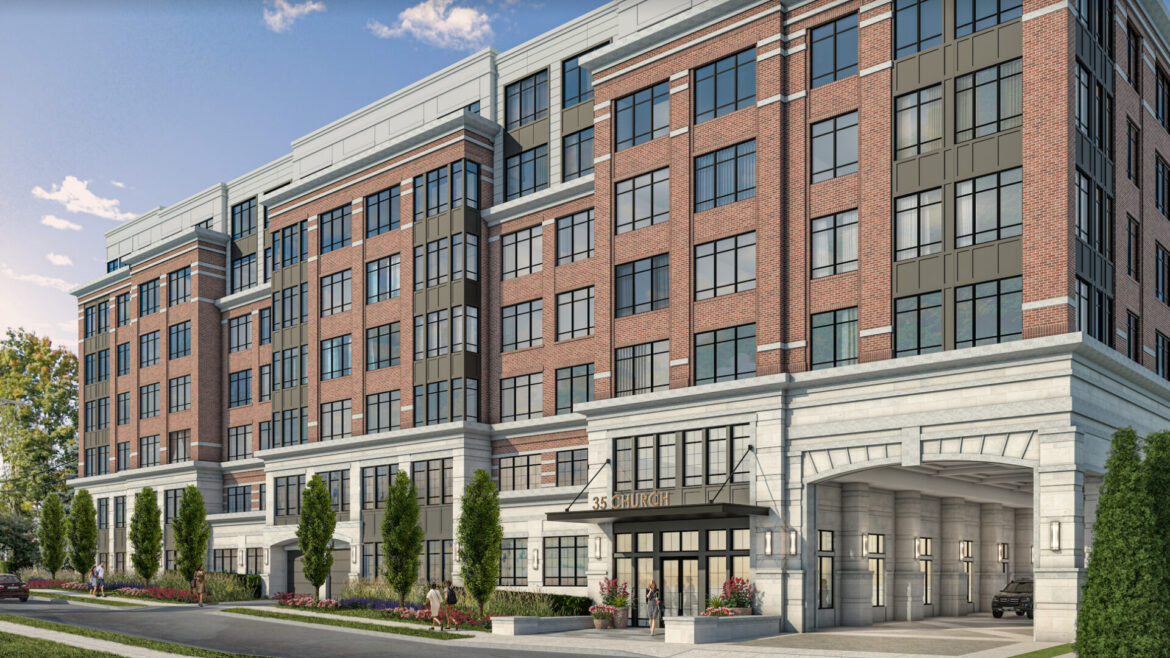 This week an application for a final site plan and special permit was submitted to Greenwich Planning & Zoning for the 8-30g “Church/Sherwood” affordable housing development in downtown Greenwich.

Last fall it was submitted as a pre-application.

As required by the state’s 8-30g law, the development will designate 30% of the 192 apartments as affordable according to a state-defined formula.

Affordable housing must be under deed restriction for 40 years.

Until 10% of Greenwich’s housing stock is affordable, 8-30g will apply.

It would take about 1,200 affordable housing units to reach 10%.

Overall, around 5,600 new units would need to be created under 8-30g before Greenwich is compliant.

Last fall, when the Church-Sherwood nominees submitted their pre-nominations, the pushback was swift.

Residents said pedestrian and traffic safety was an issue. They testified in October that Church Street was a major cut from Putnam Avenue to Greenwich Hospital and the Merritt via North Street, and is so narrow that often a driver has to stop and pull over for oncoming traffic reverse.

The building is designed by Minno & Wasko Architects and Planners to blend in with various historic buildings surrounding the property.

Nine of the 11 structures to be demolished to make way for development are on the Fourth Ward Historic District’s list of contributing structures.

*Properties with an asterisk are on the National Register of Historic Places.

“This significant infusion of new housing options is expected to address an urgent need among Greenwich’s existing workforce, many of whom have been shut out of the market due to the lack of affordable housing and virtually no rentals available in the region,” the statement said.

The rest of the affordable units would be affordable to those earning 80% or less of the area or SMI, whichever is lower.

The developer’s press release talks about providing rentals to ‘public sector workers and first responders’, although most teachers, firefighters and police officers at Greenwich Public Schools earn too much to qualify for 8-30 housing. g.

For example, according to the Greenwich Schools teacher salary gridonly a Level 1 teacher, usually someone in their first year of teaching, with a salary of $56,111, falls below 80% of the SMI.

The request includes a six-page memo prepared by Greenwich native Nick Abbott at the request of Church Sherwood LLC.

Mr. Abbott, who is part of the DeSegregate Connecticut team and serves his Assistant Coordinatorwrites that the development is the “best short-term opportunity to provide meaningful affordable housing”.

He cites statistics including that 44% of tenants in Greenwich are cost overburdened, meaning they spend more than 30% of their gross monthly income on rent and associated costs. Nearly a quarter of renters are heavily burdened by costs, spending more than 50% of their income on housing. Among homeowners, 33% with mortgages are cost burdened and 18% with mortgages are very cost burdened.

He writes that based on listings on Zillow and Apartments.com, there isn’t even a single 2-bedroom apartment for rent in Greenwich that’s affordable for a household earning less than $80,000 a year.

Abbott writes that while the city has historically invested in and built affordable housing, its current efforts fall short.

He suggests that it is precisely because of its history as a center for diverse and affordable housing in the early 20th century that Historic Fourth Ward is an ideal location for 8-30g development.

“The Fourth Ward is historically notable for the diversity of its populations, which included a mixture of Irish, Italians, Poles, and African Americans,” Abbott wrote in his memorandum, adding, “Affordable housing can preserve and enhance the diverse character of the Fourth Ward by ensuring that future households of modest means have the same opportunity to find housing there as their historic ancestors.

Abbott concludes his note by quoting first manager Fred Camillo as saying: “We are trying to marry Greenwich’s past – which has made it so attractive – with a brighter and bolder future.” Camillo’s quote is from Remarks he spoke out last August on the 2020 census.

The full quote from Camillo, who is a staunch opponent of 8-30g was: “As we try to marry Greenwich’s great past – which has made it so attractive – with a brighter and bolder future – it does not not include doubling the size of our population, as this has many disadvantages.

At a press conference outside New Townhouses at Armstrong Court last week, Mr. Camillo, along with State Rep. Meskers (D-150), State Rep. Kimberly Fiorello (R149), state senator Ryan Fazio (R-36) and leaders of the housing authority, spoke about the negative impacts of 8-30g on Greenwich, given that the city’s high land values make it particularly attractive to promoters.

Camillo said he was very concerned about the increased impervious surface resulting from the developments, especially at a time when flooding has increased across the city and memories of Ida are fresh in people’s minds.

Senator Fazio said through 8-30g, the state is placing an undue burden on Greenwich, allowing developers to ignore local zoning rules that have the community’s interest at heart.

Fazio said the delegation would soon introduce legislation that would reform 8-30g and would have bipartisan support.

In addition to Church-Sherwood, there is a proposal for a large 8-30g development at Benedict Court and Benedict Place behind St Mary’s Church on Greenwich Ave. It would have six floors and 110 units. Likewise, it would replace a number of historic houses with a multi-storey building.

A third large 8-30g development has been proposed at 5 Brookridge Drive. It would replace a 1910 single-family home with a five-story building consisting of 86 units.

Neighbors Wind Opposition at 8-30g on Church and Sherwood; Destruction of the historic district planned October 14, 2022

The chairman of the Greenwich Housing Authority castigates the affordable housing proposals: “The 8-30g is abused by developers.