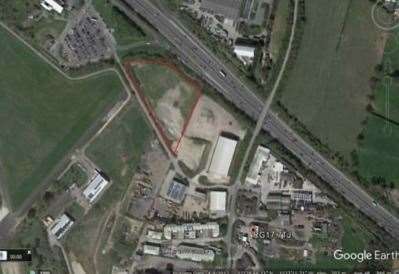 Plans to further develop a pristine open storage site in the Area of ​​Outstanding Natural Beauty (AONB) near the Membury Airfield area have been approved.

The site along Ramsbury Road was denied permission to operate after a previous application expired.

Opponents described the claimant’s actions of destroying the land and setting up machinery there without permission as “insulting”.

Lambourn Parish Council said the field should be restored.

“It’s not about keeping a site within the AONB,” said Bridget Jones of the parish council.

“The claim that it enhances biodiversity when it was the plaintiff who destroyed it is insulting.”

She said since 2018, when the previous request was granted, the number of heavyweights has doubled.

“The cumulative impact of further development affects all local villages,” she said.

“Yet the planners say the effects are not considered sufficient.

“Complaints from residents about noise, construction and working outside of working hours have been ignored or dismissed.

“They have no confidence in the effectiveness of the planning conditions.”

“The Membury service station is an anomaly that dates back to the Second World War,” he said.

“No sane person would consider turning it into a job pool if we had a blank sheet of paper today.

“I see no justification for allowing additional industrial development beyond that already designated.

“Claimants should be required to return the land to its original condition and be subject to enforcement action if necessary.”

Carolynne Culver (Green, Ridgeway) asked if council should wait for the local plan update for West Berkshire before making a decision.

“After reading the report [around employment areas]clearly we need more smaller venues in Newbury,” she said.

“Should we wait to see what we do with our labor pools in general?

“It’s not in an employment area right now. We should stop saying “well, it’s near her”. The same goes for the cumulative impact. We can’t just cut something into pieces and look at it individually.”

Councilors felt that there was a lack of a ‘cumulative’ impact assessment carried out on the proposal to assess traffic quantities and the impact on drainage.

Council planning officers have recommended that the plans be approved, saying the proposed change of use is not seen as detrimental to the character and appearance of the area or the AONB subject to the securing of appropriate landscaping.