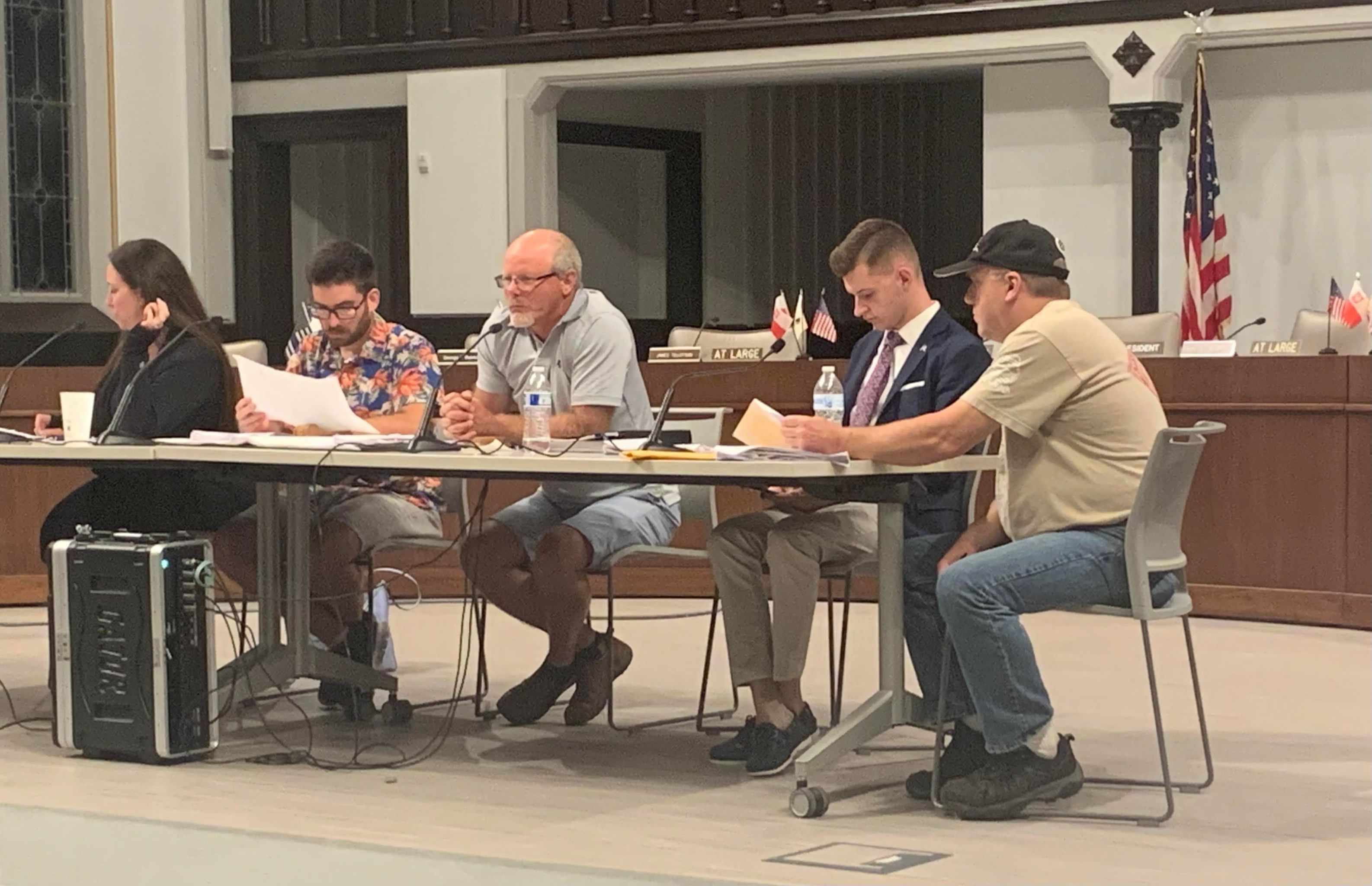 CHICOPEE – After lengthy discussions, the Chicopee Planning Board approved final site plans for a pilot Travel Center on Burnett Road at their July 14 meeting. Approval is contingent upon Pilot obtaining clearance from Eversource and the Massachusetts Department of Transportation (MassDOT).

The Planning Council arranged an initial hearing with Pilot on May 5.
Vanasse Hangen Brustlin Inc. (VHB), Director of Land Use Planning, John Furman, provided detailed background to the history of the site. Furman was part of an initial project that transformed the space into a mixed-use hotel, gas station and dining space in 2018. While the project gathered the necessary permits, the advent of the coronavirus pandemic coronavirus halted the project.

Soon after, Pilot expressed interest in getting involved with the site. Furman shared that the design team continues to work alongside Eversource and MassDOT, ensuring the space has a reduced carbon footprint and meets traffic qualifications. Furman also explained that changing the team’s plans, such as removing a Wendy’s drive-thru, was to prevent traffic disruptions.

Residents of Burnett Road expressed fierce opposition to the truck site. Ahead of the meeting, a resident ordered a recorded phone message throughout Chicopee advising community members to oppose the project, according to comments from Ward 6 Councilman Derek Dobosz.

Residents noted that the pilot site modifications represented a significant change from the site plans approved in 2018 by the Planning Board. Other residents and Dobosz also discussed the project’s severe traffic impacts that will further burden Burnett Road.

The Planning Board ultimately approved the preliminary site plans before voting against finalizing the site plans.

The city council also highlighted the pilot’s proposed project at its June 7 meeting.

During the council’s discussion of the points, Dobosz remained critical of the proposed travel hub. Dobosz said the project would be “very, very harmful” to the area because of its impacts on traffic.

“Their own traffic study indicated that it would increase Burnett Road traffic by 10-20%. That’s pretty significant…I’d bet if there was another independent traffic study, it would be a lot higher,” Dobosz said.

“I’ve never heard of this before… To the best of my knowledge, no gas station has an above ground gas tank. It looks like a bomb ready to explode. [It’s] absolutely ridiculous, we don’t want that,” Dobosz said.

Dobosz said he and residents in his neighborhood are fine with the property being able to be redeveloped, but said “smart developments” that match neighborhood sensibilities are needed. The city council eventually decided to discuss the matter further at a licensing subcommittee meeting.

Ahead of the planning committee meeting on July 14, the subject sparked a debate between two city councilors via social media. On June 23, Dobosz published that Ward 1 Councilman and State Representative candidate Joel McAuliffe had received a $500 donation from the developer and owner of the proposed May 25 truck stop.

“Do you think this will affect his vote on the upcoming truck stop? I wonder if the developer has donated to other city officials,” Dobosz questioned via a Facebook post.

McAuliffe expressed a categorical denunciation of Dobosz’s inference. McAuliffe accused Dobosz of lying about the city council’s abilities to prevent the project and the project’s negative traffic implications.

“Councillor Dobosz had been an effective advocate for Ward 6, but lately he has turned to methods of lying and outright intimidation to pressure officials to vote his way… The only thing the city council can do is refuse the request for the larger one above. ground fuel storage permit,

McAuliffe continued, “I understand that some people may not like the project, but the facts matter. There has been no evidence from Chicopee police, fire or planning that this will increase traffic – in fact, it should lead to reduced traffic on Burnett Road.

Dobosz countered McAuliffe’s sentiments, arguing that the votes were “not a done deal”.

During a three-hour long meeting, Burnett Road residents and Pilot representatives endured a back-and-forth debate over the future of the project.

Furman announced updates to the preliminary plan for the project. Some of the major revisions include reducing the distance between the Travel Center and its parking spaces, adding outdoor seating, adding electric vehicle chargers, and installing a fire extinguisher system. of fire.

Regarding the controversial aboveground gas tank, pilot tank specialist Ray Vaughn assured residents of the tank’s safety. He explained that the tank is surrounded by a fence and makes it easier for the pilot to access it to monitor its condition.

“The mere ability to see the problem is huge. If I had a tank, that’s what I would do,” Vaughn said.

Furman explained that Pilot is finalizing the licensing process with MassDOT and Eversource. He expressed confidence in the organization’s approval, as the only significant change from the project’s previous use is the relocation of the sidewalk to accommodate wide truck bends. The changes have already received approval from the Mass Environment Policy Act.

“Pilot is looking to start construction as soon as we have approval… It’s very unlikely that MassDOT won’t issue us a permit,” Furman said. Construction should take between 150 and 200 days if the project is approved.

Residents remained skeptical about the viability of the project. After an initial outcry over the limited time for public participation, the Planning Board allowed every resident a free say on the proposed travel hub. David Amos argued that the Pilot Travel Center is wasted potential for the space due to its proximity to a Pride Travel Center and negative traffic impacts.

The traffic issue became a hot topic as residents demanded that Pilot conduct an independent traffic study. Pilot traffic engineer Joseph Balskus made numerous presentations to the crowd, sharing that the travel center requires a slight increase in traffic compared to the previous mixed-use hotel proposal.

“This project will increase traffic on Burnett Road…it will be a very slight change in traffic,” Balskus said. As vice president of the Traffic Certification Board, Balskus asserted that the traffic study was accurate and created independently of Pilot’s influence.

Residents remained skeptical about the impact on traffic. Glenn LaPlante asked Pilot to hire an independent contractor for a traffic study. LaPlante also shared that the nearby Pride Travel Center has suffered 670 police visits over the years, posing another traffic problem for Burnett Road.

“It’s a looming disaster…we should have a say in what’s happening in our area,” LaPlante said.

Dobosz reiterated the sentiments of his residents. The councilor argued that the traffic study does not take into account other new developments in the area, including a special needs school due to open nearby in September. He pointed out that hundreds of his constituents are against the project.

Ahead of the Planning Board vote, Pilot Economic Development Vice President Patrick Deptula addressed some of the neighborhoods’ concerns. He argued that the aboveground diesel tank remains “invaluable” because Pilot can closely monitor its condition. Deptula also promised locals that Pilot would be a good neighbor in the area.

“It’s one step in a long process…I’m confident that when we’re done, we’ll be an exceptional neighbour,” said Deptula, who said he was open to carrying out an independent traffic study. .

The Planning Board eventually voted unanimously to approve the final plan for the site subject to it receiving the required permits. Planning director Lee Pouliot explained that the council could not refuse the project due to issues with the use of the building. Pouliot indicated that this aspect will be addressed at a future meeting of the zoning committee.

Going forward, Dobosz shared that the city council will hold a licensing meeting on July 25 at 6:30 p.m. to consider the above-ground gas station.