By Betty A. CraneMarch 2, 2022Site plan
No Comments

A photo simulation provided by Orion Renewables illustrates what the solar farm project could look like to passers-by on the north side of Bowers Road in Goodland Township.

GODLAND TWP. – A California-based renewable energy company that plans to build a $100 million solar farm in Goodland Township has submitted a special application for a land use permit, along with a site plan to officials of the township for the proposed development.

Goodland Township Supervisor Ron Cischke said a representative from Orion Renewable Energy Group delivered the documents to City Hall on Feb. 18. “There are no public hearings scheduled on their application and site plan yet. There’s a lot to do before we get to that,” Cischke said.

Copies of Orion Renewables’ application and site plan, Cischke said, will be forwarded to the Goodland Township Planning Commission, the township’s legal counsel and the Building Code Authority and to other related agencies for review and comment prior to scheduling public hearings.

“We have talked about it, and it is possible that there will be two public hearings. One for the special land use permit application and one for the site plan, but that will be up to the Planning Commission to determine,” Cischke said. “That probably won’t happen until their April meeting at the earliest.” 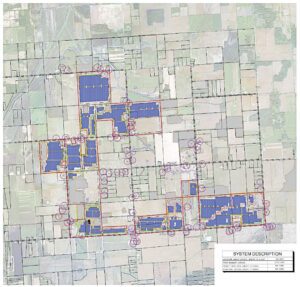 The proposed site plan illustrates in blue where solar panels would be installed on 13 parcels in southeastern Goodland Township.

Amanda Hoffman, project development manager for Orion Renewables, was not told of any scheduled meetings regarding the company’s filings with Goodland Township.

Orion Renewables plans to build a 100 megawatt solar farm which will be bounded by Bowers Road to the south, Shaw Road to the north, and Cade and Sisson roads to the east and west in the southeast corner of the township. Hoffman said Orion’s proposed project will be located on property owned by 13 local landowners that covers 1,713 acres – although only 689 acres are expected to have solar installations.

The proposed project has been pitted neighbor against neighbor by opponents and individuals who would have signed leases with Orion Renewables to use their land for up to 25 years, in return for payments from the company.

Orion Renewables said that in the first year of operation, if Goodland Township officials allow it, the township could realize more than $750,000 in property taxes from the development.

In a recent statement to the Departmental press, Hoffman said property owners who sign with the company will receive millions of dollars in lease payments and more than $8 million in property taxes for Goodland Township over a 25-year period.

Site plan review process by the Planning Commission, subject to public review and comment, details of where the proposed development would be built, including the location of inverters and substations on the leased plots.

The site plan, including photo simulations of what the proposed development might look like for passers-by on local roads, can be found at www.goodlandsolarproject.com.

The Goodland Township Planning Commission will meet March 17 at 7 p.m.