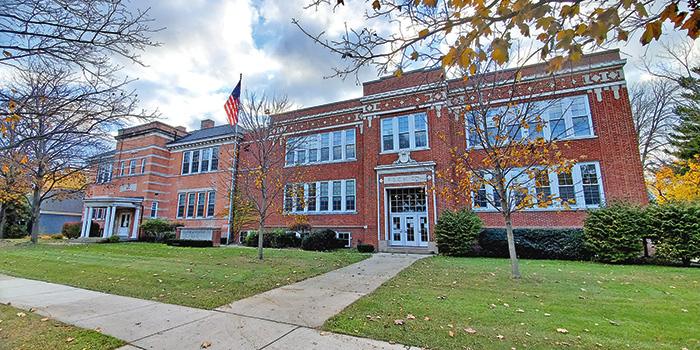 photo by Renée Landuyt
The school administration building at 389 St. Clair will include 18 apartments, as well as eight townhouses built separately on the property.

CITY OF GROSSE POINTE — With the conditional rezoning of 389 St. Clair from a single family to a transition at Monday night’s council meeting, 18 apartments and eight townhouses are now slated for the property.

After tabling the issue at the August council meeting, developers, brothers Mark and Craig Menuck of Curtis Building, went back to the drawing board to incorporate council recommendations and community input.

Changes to their original proposal include reducing the number of apartments from 23 to 18; eliminating and combining smaller units to create units as large as 1,270 to 1,600 square feet; reduce the size of the building on the Notre-Dame side to create setbacks of 9 feet instead of 5 feet; provide more parking spaces per unit than originally planned; and incorporating additional green space.

The site plan for the development was found to be consistent with the city’s master plan, according to city planner John Jackson.

“Although this site is not identified on the future land use plan as multifamily or transitional,” he said, “…(the site plan) speaks to some of the goals and objectives included in the city ​​master plan, such as preserving local historic assets like the school building and also providing alternative housing types and styles.

Demonstrated demand for use, Jackson said, can be seen in the fact that there are nearly 1,400 homes in the city that are only occupied by one or two people, while there are than 554 one-bedroom and two-bedroom units in the city. .

“The fact is that the houses are bigger than the population demands,” he said.

However, conditional rezoning will be revoked if developers fail to meet agreed criteria, such as sticking to a maximum of 18 apartments and eight townhouses; limit the height of the building to 35 feet, measured to the middle of the roof; maintain front yard setbacks the same distance as other Notre Dame homes, approximately 25 feet; and keep the side yard setback to the south a minimum of 9 feet and to the north a minimum of 22 feet.

Developers will also be required to pressure test the existing water line to ensure adequate water pressure in the existing neighborhood and new development, covering 100% of any improvements deemed necessary by the City, which could include the water main replacement along either Notre Dame or St. Clair.

“The zoning change is conditional on them building the project exactly as you approve of it on the site plan,” City Attorney Charles Kennedy said, “and there are timelines consistent with our code. zoning so they can do it.”

“I have complete confidence in our ability to manage this process and work with the developer and get what we need,” said Mayor Sheila Tomkowiak. “…Best practice for old buildings is adaptive reuse, not filling landfills with century-old buildings and not building cheap houses so we look like a housing estate. That’s what would happen here.

In the jam-packed council chamber on Monday evening, many residents opposed the development, some of whom put up signs on the lawn indicating so.

“If you want to build apartments, do it in a different zoning,” said St. Clair resident Steve Cavera. “Don’t do it in the middle of this residential community. It’s the wrong place, not necessarily the wrong idea. For those of you in the audience who want more rentals, I don’t disagree with you, (but) pick the best place for it. It’s not the best place for it.

Concerns of St. Clair residents opposed to the development included apartment visitors filling up street parking, the type of tenants who might move into the city, and increased traffic on the streets.

Photo by Renée Landuyt
These signs opposing the apartment development were placed along the stretch of St. Clair between Jefferson and Maumee.

While a report by the Transportation Improvement Association stated that the apartments would generate 77 fewer vehicle trips per day than the current use of the administration building, opposing residents strongly disagreed with the statistics.

However, some residents supported the development.

“Studies have shown that we need more smaller units for seniors and single professionals and these will appeal to single professionals with the rents they are asking for,” said St. Light. “Removing the old building, I think, will disrupt the neighborhood far more than retaining and rehabilitating it.

“We have empty storefronts in The Village that could handle some foot traffic,” he added, “and it’s only a few blocks away and it’s a perfect location for that.”

According to City Manager Pete Dame, a financial report revealed the development will generate $227,000 in taxes per year, of which $65,000 will go to the City. Currently, the City does not levy any taxes on school property.

“The proposed development would support the value of the property,” Councilor David Fries said. “It would strengthen economic investment. It would provide a place to live for empty nesters and young professionals and, finally, it would preserve the architecture of 1906 and 1912.”

Ahead of the vote, several council members took the opportunity to tour a development in Plymouth where Curtis Builders has also converted a former school building into flats. Everyone said they were impressed.

“It’s truly remarkable how much the building’s history has added charm to the character of this development,” said Councilor Maureen Juip. “…(389 St. Clair) is truly a building that contributes to the character of our community of Grosse Pointe City and I am grateful that someone wants to continue to give it new life.”